From WeaselWiki
Jump to: navigation, search 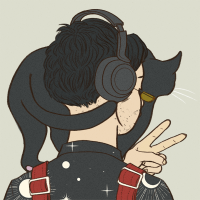 Rokkun, with one of his most talented couriers.

Rokkun is one of Sotenbori's most connected information brokers. Like most in the business of information, he is reclusive to the point where nobody knows what he looks like. Most of his clients do not even know his voice. He communicates primarily through artifacts like dead drops.

This page is pretty unfinished. Weasel plans to get to it eventually. Probably.

I resigned myself to the park bench, my search having hit a wall. "Man. What to do," I sighed.

Just then, I spotted a cat coming my way. Another stray, a short-haired tabby that I was pretty sure I'd seen sleeping on a phone booth the other day. "You guys are just everywhere, aren't you." I glanced back at my cell phone, and the halfhearted page of notes I had pecked into it. "Well, this article is going nowhere...might as well take a kitty break." As soon as I put the phone back in my vest pocket, the cat was standing almost right on top of my feet. It looked up at me as if it expected something from me. I leaned back and tapped on my lap. The cat, surprisingly, jumped right up. It was just a regular ol' tabby, but those were always my favorites anyway. "Somebody's put a lot of work into socializing you, haven't they?" I stroked behind its ears, and it leaned right into my hand.

"Yes, as a matter of fact, somebody has." The gruff voice sounded like it was coming from my phone. I pulled it out with my free hand, to check that I hadn't butt-dialed somebody again. "No, relax, your phone isn't haunted," the voice continued.

"If it's not my phone, who the hell is it?" I said to nothing in particular.

"You know, I've heard a lot of Kansai folk like to talk to street cats, but you're the first one I've heard do it in English in a long time." I swiveled my head around. Nobody human within 50 feet, nobody in the windows. "Down here. On your lap. Check the collar." I looked. A tiny little gadget dangled from a thin little twine collar that I hadn't noticed until now, with a camera barely visible, and a pinhole speaker even less so. "You like it? It's called Acoustic Kitty, though I wish I could claim credit for the name."

"Hey. Sick? I'll have you know, while I *am* a fuck, I'm not a sick one. I have standards. Well, more standards than your average mangaka, anyway."

"Rokkun. Great. Now, why is your cat sitting in my lap?"

"Do not bull shit me." I kept the cat interested with some more quick ear scritches.

"Well, how shall I put it. I heard you needed some information that's not easy to come by."

"A little kitten told me."

"You're using the cats to eavesdrop?"

"Turns out, the Kansai underworld is full of people with loose lips. Trouble is, those lips tighten up when anything else with two legs is nearby. Adorable little kitties, though? Not so much a problem. Folks just assume, just because a cat can't understand what you're saying, doesn't mean it isn't listening. Well, these cats understand. They tell me things, and for due compensation, I'll tell you those things."

"So you're some kind of spy? Info broker, probably?"

"Urban intelligence, is what I call it. The field used to be called foreign intelligence, but that was back when the Cold War was still officially going. Unofficially, of course, we know things haven't changed that much since '91." The more this guy blathered, the more the tabby seemed to enjoy it. Maybe the sound of his voice was comforting, or something.

"Except now you're spying on your own people."

"Always have been, dear client. Always have been. And you can quit trying to find which window I'm looking out of; I'm not in any of them. Just because I see you doesn't mean I'm there."

"How do you know I'm not gonna blab on you to the first cop or family man I run into?"

"Because, how does that phrase go again... <Who's gonna believe a gaijin bitch like you, anyway?>"

"Oh, is that who that was, yelling that at you?"

"Hey, don't cuss at the kitty too much." The cat wasn't especially concerned. It was too busy kicking at an itch on its cheek. "But no, I'll give you this bit of info as a sort of starter deal. Do me a favor and reach down to the left of the arm rest, will you?"

I felt a ribbon and pulled it. At the end was a small black plastic spike. "What's this for?"

"There's a twisty cap on that. Unscrew it and take out what's inside." I did so. Inside the spike was a rice paper poetry ribbon. Nothing was written on it. "Okay. You'll notice it's blank. This is because I haven't put any information on it for you."

"You have a pen, right? I've seen you with a notepad before. Write your phone number on that paper, put it back in the spike, then put it right back in the ground with your foot."

"Why not just tell you?"

"As much as I love Acoustic Kitty as a concept, it ultimately relies on over the air signals to work, so there's no way it's secure enough for it to not be overheard. No, not by somebody behind you. I'm talking about counter intelligence. Taps. Men in the middle."

"And this entire conversation?"

"Contains nothing that can be used to prosecute me."

"Then there's nothing stopping me from recalling all of them and removing their collars until the heat dies down. They got nothing. And if I'm not mistaken, neither have you."

"Fuck no, I don't own a cell phone. I don't own a landline. One of my associates will send you instructions once I've got your information in place. And by associates, I mean one of my other clients."

"Hey, if a guy wants to know the breast size of his favorite hostess bad enough, he'll follow instructions. He'll dig up one of my dead drops, and his slip of paper will say, 'Text this code phrase to this number,' and he ain't gonna know it's not me. Meanwhile, I'll have handed you a paper with your counter sign on it, which you will text back. You'll know where you're going, he'll know where he's going."

"You're a little too into this whole spy game thing."

"Hey, when it works this well? I love it when a plan comes together, and if anybody goes poking around, they're not gonna be able to make head or tail of it. Not even Division Four." The cat yawned so hard I caught a strong whiff of convenience store sushi.

"Right. Anyway, in about, oh, 30 minutes after you've stood up and walked away from that bench, one of my other clients will text you the name of a location, and another will text you an object. Your counter sign will be in a dead drop spike, the same as the one you opened just now, next to said object, across the street from said location."

"That'll be yours and yours alone. You'll know what it means."

"It's how you gotta run a business like mine under the watchful eyes of the Omi."

"Comes with the territory, you mean."

"Hey, I've heard weirder. Scuttlebutt says there's a guy up in Tokyo that has homeless people deliver bouquets to people. Hah! You'd think he'd get caught right away like that. Soon as any of his competitors figure out that's how it works, all somebody's gotta do is hand a bum a few thousand yen to do the same, and suddenly you're jamming up the signal, throwing doubt on his whole operation."

"Enough already." I gave the cat one last pat on the back. "How do I get in touch with you?"

"You won't. I will." The tiny collar speaker gave forth a popping noise. He must have killed the connection.

Kouji had better have a stomach for James Bond rigmarole

check the dead drop spike in the rock garden outside the sushi restaurant. do not open it until you are inside Don Quixote and standing by the neck ties.

it ends up containing a small slip of paper that just says, "Thank you for following instructions."

and then a cat drops by with a collar with a note tied to it, with your name on it

and that has the info on it

the trick is he trains the cats to seek out the smell of the dead drop spike, by like, soaking the little slip of paper in catnip tea

his little secret spy network of stray cats is what keeps Sotenbori's world of info going round. heh

"I must say, his methods of gathering and spreading information are certainly complicated, but at the same time, i can respect a man with brains like his."

I'm sorta envisioning him as a Japanese Dale Gribble, with an extra note of... I forget his name, the rough cut CIA guy from Far Cry 3

he's clearly just some nerd and doesn't have real experience with the intelligence community, but he's done his homework and can run an Intel ring like few others can

by that i mean he's never worked for a government agency

it's why Wada doesn't know him - since he's with a government agency, even if that agency isn't Japanese, and doesn't deal on information

"So what's stopping me from calling the cops on you?"

"You think Kansai's finest are gonna believe some foreigner? Even if you told em to look for stray cats wearing mics or cams, it wouldn't take me much to recall all of them until the trail runs cold. I hold the cards in this relationship, and that's what keeps it going."

"Now... you want the goods on what happened under the Iwao Bridge, go find the spike I buried at the golfing range. Ask for Tee Number 1B."

"Personally, I'm a man of my word: if someone's trade has to remain a secret, then my lips are sealed. Rokkun and I are both info dealers, and we both end up receiving the same news anyways, even if we deal it through different methods."

Kouji's info-dealing is through a series of keywords.

"And remember to tell my courier she's pretty. She doesn't like to come home without some positive reinforcement."

"Kamurocho? Course I know what goes on in Kamurocho. Can't quite do it the same way though. Not since some idiot opened a cat cafe and started adopting street rescues. Nah, I gotta go through... slightly more official means up there. No worries. I know people."